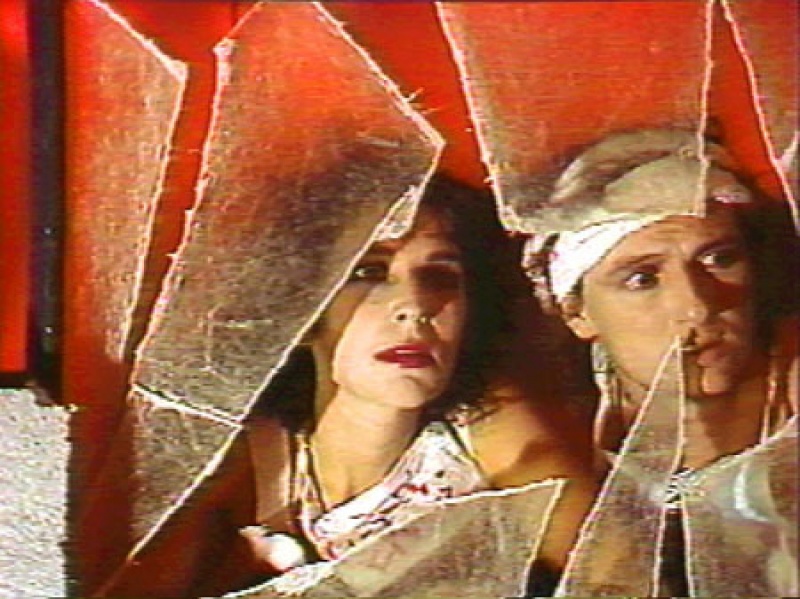 Out of the Blue
Richard Fung, 1991, 28 min., video, colour, sound.
After a flea market was robbed, police disrupted a Scarborough church service, arresting four young people of colour. Julien Didier was twenty at the time and the oldest of the arrested. This tape follows his experience of the events.
Richard Fung is a Toronto-based videomaker and writer. His tapes explore the intersection of race, sexuality and representation, and his essays on cultural policy and politics have been published in many journals and anthologies. Richard frequently programs film and video, and has served on the boards and committees of many organizations. He has lectured and taught across North America and is the recipient of many awards, including Rockefeller and McKnight Foundation fellowships, The 2000 Margo Bindhardt Award and most recently The Bell Canada award for excellence in media arts.

Once Upon A Time
Randy & Berenicci, 1984, 18:30 min.
From within the ruins of an amoral society, amidst relentless catastrophe, Randy & Berenicci take an ironic look at the cancer of greed and corruption.
Randy & Berenicci (Randy Gledhill & Berenicci Hershorn), in an oeuvre spanning more than 30 years, created a unique and evolving body of site-specific and time based art (performance, installation, video, public sculpture). They produced and presented their collaborative work internationally with an extensive history of recognition in art venues around the world.

How Many Fingers
Andrew J. Paterson, Alan Fox,  1981, 8 min.
Unlike the music videos of the day, a narrative structure is applied to the genre, focusing on the dramatic possibilities inherent in the music and the song lyrics modeled on George Orwell's 1984.
Andrew James Paterson is an interdisciplinary artist based in Toronto. Over a period of thirty years, he has worked with video, film, performance, writing, and music. He is best known for his video art.

AIDS PSA’s
Michael Balser (producer for Second Decade: PSA’s by David Finley, Zachary Longboy, Michael Balser, and Mike MacDonald), , 1993, 4 x 30 brconds.
Four of the original 10 artists collectively known as Second Decade who designed and produced a series of 30 second TV spots produced at the Banff Centre for the Arts.
Michael Balser (1946-2002) was a videomaker, curator, producer, AIDS activist. His video work was often done in collaboration with Andy Fabo, produced in an inventive collage style. His later works continue to reflect his AIDS activism, including Toronto Living with AIDS, produced for cable starting in 1992; two compilations of AIDS Public Service Announcements (1993) for which Balser, in collaboration with the Banff Centre, enlisted the contributions of queer video artists from coast to coast; Positive Men (1995) a mosaic of dramatic scenes about a gay male community affected and responding, together with documentary portraits of PWAs; and the autobiographical “cybertour” Treatments—Adventures in AIDS and Media (1996).

Skin
Colin Campbell, 1990, 14:50 min.
Skin is not a documentary, but an evocative and moving dramatization of women coming to terms with the pandemic that is AIDS.
Colin Campbell (1942-2001) produced over 50 video works that have been widely exhibited and written about. He received numerous awards including the Bell Canada Award for Video Art and represented Canada at the Venice Biennale in 1980 and at biennial exhibitions in Sao Paulo in 1977 and Istanbul in 1992, as well as at OKanada in Berlin (Akademie der Künste, 1982) and Documenta in Kassel, Germany in 1977. He curated video and performance programs in Toronto, Montreal, Ottawa, and Rio de Janeiro, and published texts in FILE and Fuse magazines, as well as the artist’s books The Woman from Malibu (1978) and Modern Love (1979), commissioned by Art Metropole, Toronto. Campbell was active in the artist-run centre movement in Canada, and one of the founding members (and for many years President of the Board of Directors) of Vtape.

Got Away in the Dying Moments
Dennis Day (with Ian Middleton) , 1992, 4:30 min.
The themes of mourning, urgency and healing are explored to suggest natural alternatives to the current treatments and attitudes in the AIDS crisis.
Dennis Day has produced a number of internationally-screened videos, marked by their strong use of editing, rich colors and humour. His work has been awarded a number of prizes including the “Prix à la Création Artistique du Conseil des Arts et des Lettres du Québec” (Les Rendez-Vous du Cinéma Québecois, 2001), the “Bulloch Award” for best short film, at the Inside/Out Gay & Lesbian Festival in Toronto (1997), the “Videofest Award” (Berlin, 1995) and the “Young Director’s Award” (Geneva, Switzerland, 1988). Television broadcasts include PBS (USA), TV Ontario, CBC, Vision TV, (Canada), NHK (Japan) and Canal+ (France).

Another Man
Youth Against Monsterz, 1988, 3:00
A music video examines the politics of AIDS from a radical, gay/lesbian and polysexual perspective with funky political dance music of Mr. Tim and a focus on the critical analysis of lesbian activist Chris Bearchell, a founder of The Body Politic, as well as a spectacular guest appearance by the Rev. Jerry Falwell sporting the latest latex condom-wear. The work was originally shown on City-TV's syndicated New Music Show.
Youth Against Monsterz was an Anarchist Community Theatre Collective in Toronto.

WHEN THE WORK WAS NEW:

When I was invited to make a selection of video from Vtape’s holdings to augment the current exhibition Toronto: Tributes + Tributaries, 1971-1989, two local initiatives provided a good place to start my research. Toronto’s New Work Show enjoyed two iterations in the mid-1980s: a four-day event that took place in August 1984 featuring work by 21 artists and a much larger version that took place in September 1986, with work by 47 video artists and 4 musicians and spoken word artists.

Both were initiated from within what we called “the community”, then a scrappy gang of d.i.y. enthusiasts committed to the electronic image but otherwise un-united. Not a uniform voice by any means but a loose group capable of a level of cooperation that resulted in these exhibitions. In both cases two artists – Randy Gledhill and Rodney Werden – were the catalysts, spurred to action by the perceived lack of screening opportunities facing all of us working in video along with the wealth of material being produced. With organizational assistance from Vtape, office space from Chromazone and some money from The Canada Council Media Arts section, these shows came together. A venue was secured (in both cases Theatre Passe Muraille), screening equipment located and a modest catalogue produced.

Inclusivity was a part of these shows; between the knowledge available at Charles St. Video where new work was produced and Vtape where new works showed up when they were ready for distribution, a list of artists was put together. Given the nature of this almost “open call” approach to programming, no one aesthetic style dominated, no one genre prevailed, no one theme was favoured. Documentary, either traditional or post-modern hybrid, experimental narrative, purely visual experiments, performance for the camera – all were part of the mix – a kind of pluriverse á la William James, where everything was possible. But the mix worked in all its contradictions; it was argumentative and fractious and impossibly intertwined in both ideological and physical ways but somehow the very unstructured structure supported it all and audiences found the work.

Finally, the very real conditions being experienced by media artists working in Toronto in this time period should be noted: censorship of film and video was being enthusiastically pursued by the provincial government through regulation, legislation and enforcement; projectors and other large-scale presentation equipment for video was, generally, not available; most screening opportunities were in galleries and museums not in theatre-type settings; and, perhaps most importantly, this was the era just before the rise of the media arts festivals that are so much a part of our environment today. (In 1987, just one year after the second New Work Show – 1987 - the Images Festival launched what has become a phenomenon in the city with over well 50 festivals featuring specific genres, communities and now neighbourhoods as a focus.)

In the end, the selection presented here is not restricted to these two foundational programs of video art. After viewing all the titles in both the 1984 and 1986 New Work Show, I sought other works from the same period within the Vtape holdings to reflect the discussions of this era - or at least my memory of these. That’s my story and I’m sticking to it.