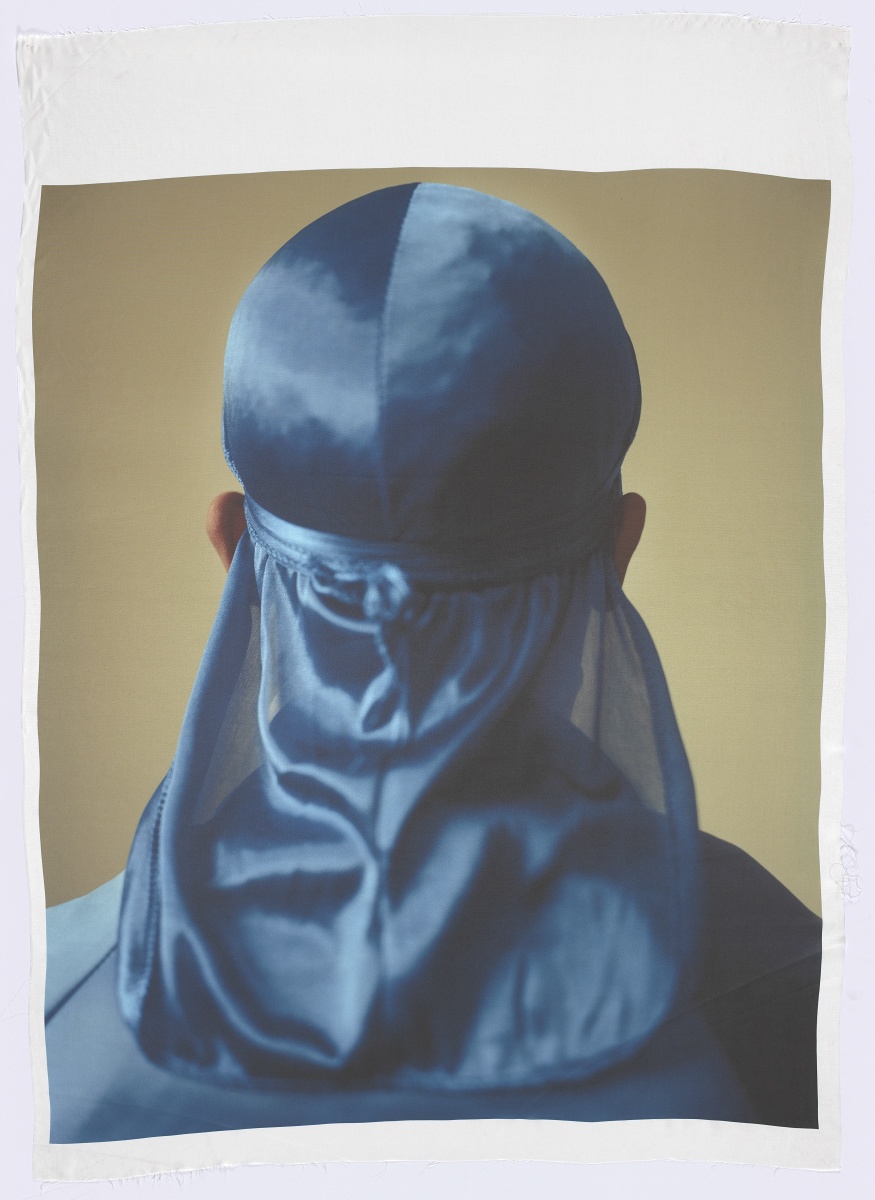 Timeless fashion trends often involve the intersection of form and function. Du-rags are an iconic head/hair accessory that fit this narrative. In addition, they carry a deep cultural significance, designed to protect and preserve Black hairstyles. With his series Du-Rags, African-American artist John Edmonds highlights the divine and intimate materiality of these headdresses with unique portraiture printed on sheets of fine silk. Two of these works, Untitled (Du-Rag 1) and Untitled (Du-Rag 3), both from 2017, are part of the exhibition Dawoud Bey, John Edmonds, Wardell Milan at the AGO.

Born in Washington, D.C., in 1989, John Edmonds began practicing photography at just 15. He received his BFA in Photography from the Corcoran School of Arts & Design in 2012, and his MFA in Photography from the Yale School of Art in 2016. Not long after completing his MFA, Edmonds was publicly recognized by artists Carrie Mae Weems and Mickalene Thomas as an important emerging artist. This was for his series Hoods (2016 - 2018), which featured rear-facing, anonymous sitters in hoodies as a way of showcasing the complex and often stereotypical lens through which some view those who wear hoodies. Hoods was presented as a public installation outside Toronto's Metro Hall as part of the 2018 Scotiabank CONTACT Photography Festival.

Edmonds was inspired to create his acclaimed series Du-Rags not long after moving to his current home in the Crown Heights section of Brooklyn, New York. While walking on the street he passed a young man wearing a du-rag, and noticed the head wrap’s train fluttering in the wind from behind. In the series, much like Hoods, Edmonds photographs his sitters from behind, isolating the du-rag and making them the central element in each photograph. That way, as Edmonds has remarked, “The viewer has to look closer, look deeper, and the more you look into the image, the more you look within: at your own preconceptions, biases, or understanding of what it is a hood or a du-rag may signify.”

Two works from this series, Untitled (Du-Rag 1) and Untitled (Du-Rag 3), were acquired by the AGO in 2017. Du-Rags allows the viewer to appreciate the shiny, cascading material of the garment and notice its regal qualities, as well as the sensual intimacy of its form-fitting, soft fabric. Edmonds also aims to channel thoughts of divinity and sacredness in his depiction of du-rags, noting in a 2018 interview that the triangular composition of the photographs are reminiscent of “sacred geometry”. Both works are printed on large sheets of Japanese silk, meant to mimic the materiality of the du-rags themselves as well as reference the classic Christian symbolism of the Veil of Saint Veronica.

Though his career is still young, John Edmonds is already an acclaimed and widely exhibited artist throughout America and internationally, and is the recipient of numerous prestigious awards, residencies and accolades. His first solo museum show, John Edmonds: A Sidelong Glance, is now on view at The Brooklyn Museum.

Untitled (Du-Rag 1) and Untitled (Du-Rag 3) are part of Dawoud Bey, John Edmonds, Wardell Milan, located on Level 1 in the Robert & Cheryl McEwen Gallery (Gallery 129) at the AGO.