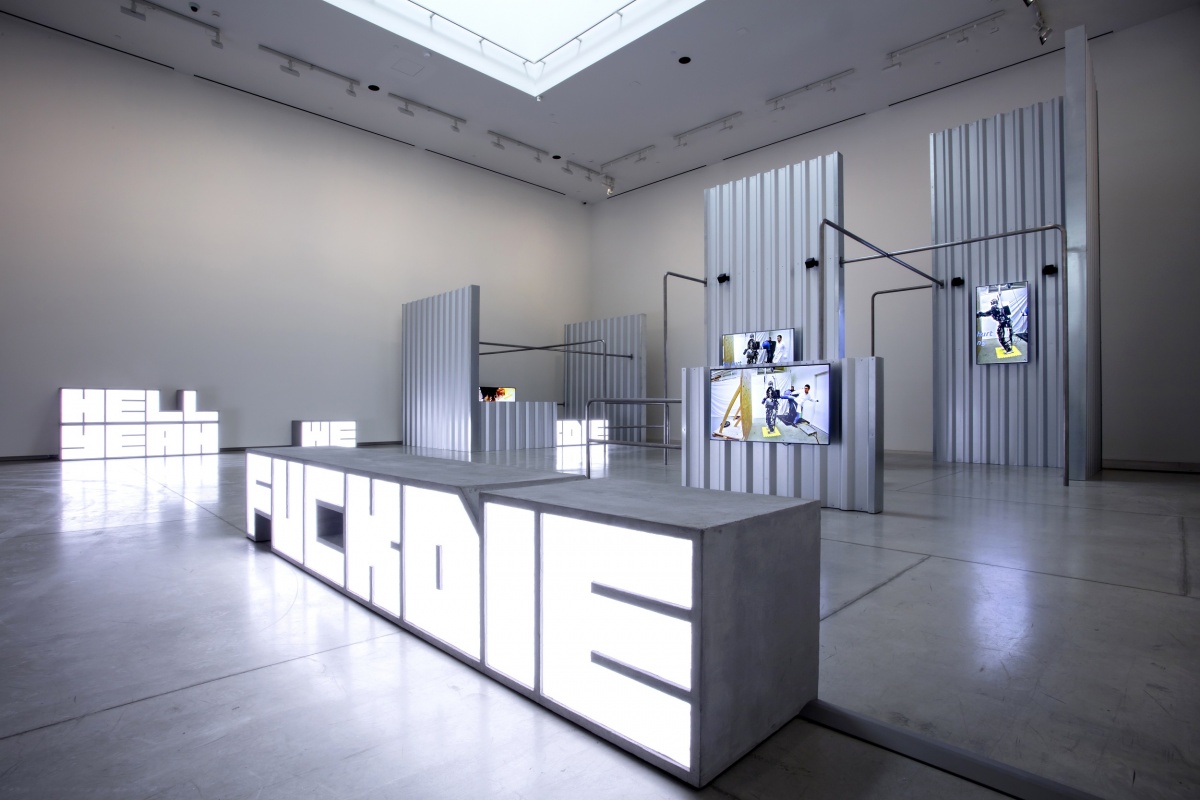 Hito Steyerl is one of the most influential creators and thinkers of our time and her exhibition at the AGO will be one of the largest survey exhibitions of her work to date. In Hito Steyerl: This is the future, she offers a nuanced critique of the information age with 11 captivating works that will stay with you long after you leave the museum. This is the future touches on everything from the rise of robotics and artificial intelligence to the shadowy world of elitist tax havens. Steyerl creates unique artworks that combine video narratives with built environments, revealing thought-provoking, multilayered concepts. This is the future is opening this week at the AGO on Level 5 of the Vivian & David Campbell Centre for Contemporary Art.

The exhibition, which is overseen by Adelina Vlas, the AGO’s Associate Curator, Contemporary Art, features some of Steyerl’s most notable works from the last 15 years, including the critically acclaimed Hell Yeah We Fuck Die (2016).

The darkly humorous title of the installation highlights the five words that appear most frequently in the English-language song titles on the Billboard music charts from 2010 – 2014. The artwork comprises of two videos across four screens: the eponymously titled Hell Yeah We Fuck Die (2016), a three-channel video, and Robots Today (2016), a single channel-video. These videos are presented in an environment that resembles a module for parkour, a sport that originated in military training and involves moving as quickly as possible through a series of obstacles.

The video Hell Yeah We Fuck Die features a compilation of footage from robot technology testing labs, in which humanoid robots are subject to abuse, both real and simulated, all supposedly in the name of progress. Steyerl assures us that “no robot was hurt during filming,” but the question remains: how much must these human-like machines withstand before they are mission-ready?

Robots Today takes place in the devastated city of Diyarbakır, on the Turkish-Syrian border. Considered the unofficial capital of Northern Kurdistan, the city was mostly destroyed in 2016 by the Turkish military as part of ongoing conflict in the region. In the video, Steyerl uses her essay-documentary style to reveal Diyarbakır as the home of Ismail al-Jazarı, an inventor active in the 1100s. His creations, which included early musical machines, laid the groundwork for the computer technology of today. Steyerl combines images of the city with questions addressed to Siri, the virtual assistant lurking inside Apple’s operating systems, interrogating the role computer technology plays in war.

Steyerl is a notable academic and lecturer. She holds a PhD in philosophy from The Academy of Fine Arts Vienna, and is currently a professor of New Media Art at Berlin University of the Arts. In 2019 alone, her work has been presented in solo exhibitions in the U.K., United States and Germany and was included in the group show May You Live in Interesting Times at the 58th Venice Biennale. In addition, she was the recipient of the prestigious Kathe Kollwitz prize in Germany.

Don’t miss Hito Steyerl: This is the future, opening to the public October 24 on Level 5 of the Vivian & David Campbell Centre for Contemporary Art. AGO Members can attend exclusive Members’ Previews on October 22 and 23, before the exhibition opens to the public.

You can also hear from Hito Steyerl herself on October 23, in her highly anticipated conversation with Brian Droitcour to celebrate the opening of the exhibition.