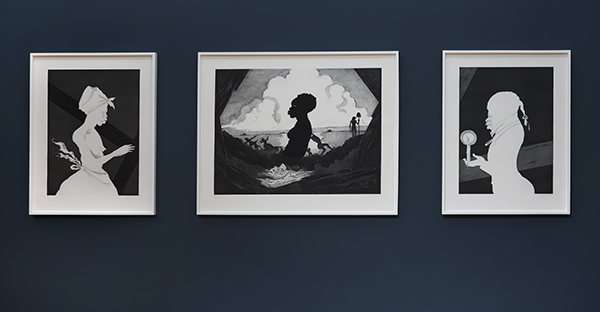 The artwork reimagines a triptych – a work of art that is divided into three sections. Popular in both the church and private worship throughout the Middle Ages, Renaissance and Baroque periods, triptychs allowed artists to present a main story at the centre, with two supporting scenes on either side. Often, as in Resurrection Story with Patrons, the side panels depict patrons of the artwork, as a way of honouring their generosity. Walker spent several months in Rome, a city filled with churches that feature triptychs.

Her work was on view in our European galleries, in the same room as our two Gian Lorenzo Bernini sculptures, The Crucified Christ (Corpus) and Pope Gregory XV. Bernini is one of Rome’s most iconic artists, with artists from around the world visiting the city to study his works. This includes Walker, but she reinterprets the traditional imagery of that period in Rome to include a community that’s otherwise missing.

Created in 2017, Resurrection Story with Patrons shows small figures raising an enormous sculpture of a naked Black woman. On both sides of the centre panel, male and female figures are in reverse silhouette. The couple appears to be African-American and is visually similar to the Black residents of the antebellum South that are often featured in Walker’s work.

Resurrection Story with Patrons raises questions about people featured in art – specifically works commissioned by wealthy patrons. Who gets to be immortalized and why? And who is forgotten and ignored? In this work, Walker creates space for Black women and men to be remembered and at the centre of a narrative – rather than marginalized, forgotten or overlooked in (art) history.