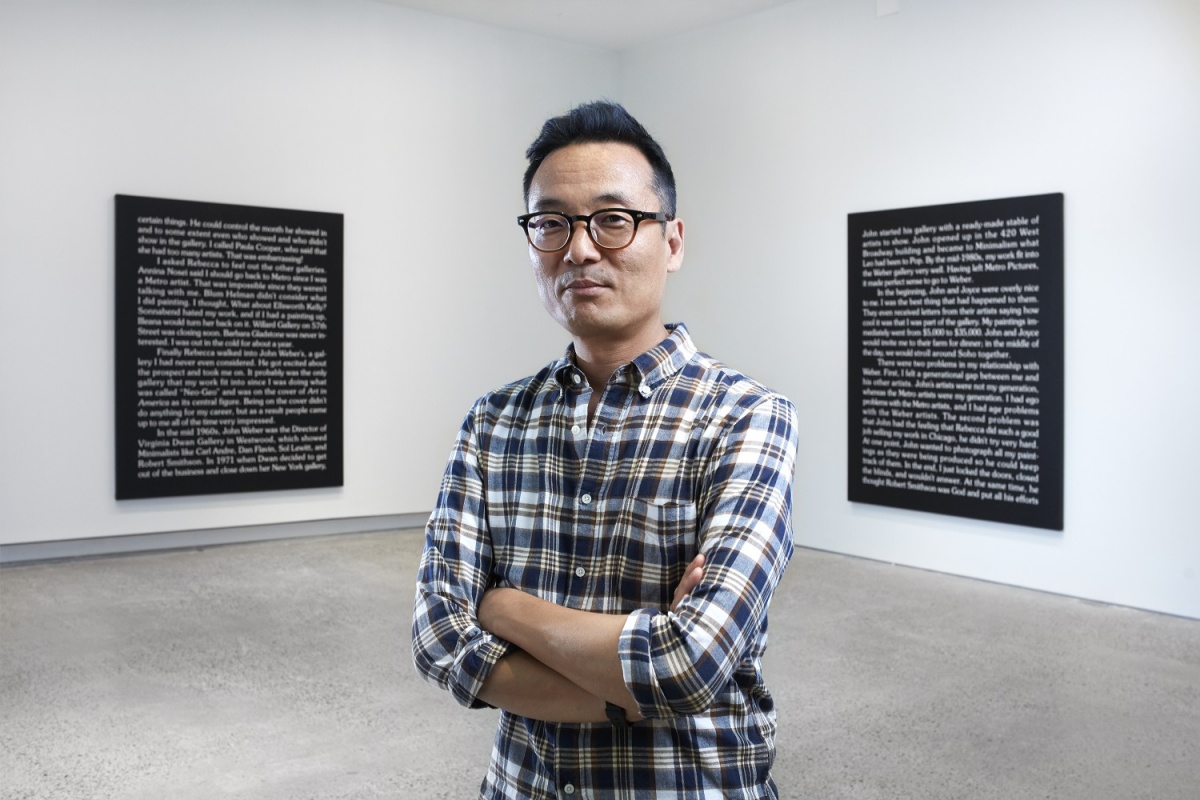 “The art you make has to be yours; you stand behind it and it has to be real sturdy.” – Jack Goldstein

Published in 2003, Jack Goldstein and the CalArts Mafia is a candid and searing memoir of a life lived in the art world. Born in Montreal, Goldstein was a leading voice of the Pictures Generation, a group of artists in the 1970s and ‘80s influenced by their time in art school and mass media. Co-written with Richard Hertz before Goldstein’s suicide, the memoir recounts Goldstein’s professional and personal frustrations. The book inspired a series of paintings, now on view at the AGO, by Vancouver-based artist Ron Terada.

Jack and the Jack Paintings: Jack Goldstein and Ron Terada features 14 of Terada’s large-scale text-based paintings. Shown for the first time, these works recount episodes from Chapter 11 of Goldstein’s memoir, entitled “New York Dealers and Collectors,” and are presented beside Goldstein’s sublime photorealistic image of a lightning storm.

We caught up with Ron recently to ask him a few questions about getting to know Jack and the inspiration behind these works.

AGO: When were you first introduced to the book Jack Goldstein and the CalArts Mafia?

Ron: The book was released in 2003, so I may have got my hands on it in 2004. I’ve always been a fan of Jack’s work but also of the whole Pictures Generation of artists. When this book came out, I was interested because for whatever reason, Jack kind of disappeared off the face of the art map. I was curious.

AGO: These paintings reproduce Jack’s own words. What inspired you to put them onto canvas? Do you share his sentiments?

Ron: There are things in the narrative that resonate with me. When I started this work I had just turned 40, so maybe I appreciated it as someone at the brink of becoming a mid-career artist. But I was primarily interested in undertaking this as another kind of art history, a way to illuminate the social dynamics that exist in the art world that don’t come up in most works. This project was a way of documenting that, revealing all the good and the bad.

AGO: You’ve been working chapter by chapter, but not sequentially. Why stop with Chapter 11?

Ron: I didn’t set out to reproduce the entire book. When I started, I was most interested in the last chapter, when Jack’s at his lowest, living in a trailer in east L.A., missing his teeth, with no running water, doing menial jobs, and wondering what the hell happened. Chapter 11 is about collectors and dealers. These works are a very real portrait of him when he’s still a working artist.

AGO: You’ve spent a long time with Jack’s words. Do you still hear his voice in your head?

Ron: Because of the way these paintings are made, with each letter stencilled in, it was hard not to become fixated on certain words. I catch myself repeating his phrases and thinking, "that’s something that Jack said."

AGO: How did you achieve the uniform look of the works?

Ron:  The font is ITC Souvenir. I wanted something that was evocative of the ‘70s and ‘80s. It has a bit of a working class feel to it – much like him.

AGO: The installation features a work by Jack. Why this one in particular?

Ron: The painting is a perfect complement, as it’s in Chapter 11 Jack talks about the grief involved in trying to sell a lightning painting. And the painting is incredible.

Jack and the Jack Paintings: Jack Goldstein and Ron Terada is included in General Admission and is on view at the AGO until September 2018. The Jack paintings in this exhibition were acquired with funds donated by Eleanor and Francis Shen, as part of a multi-year gift dedicated to acquiring Asian contemporary art.