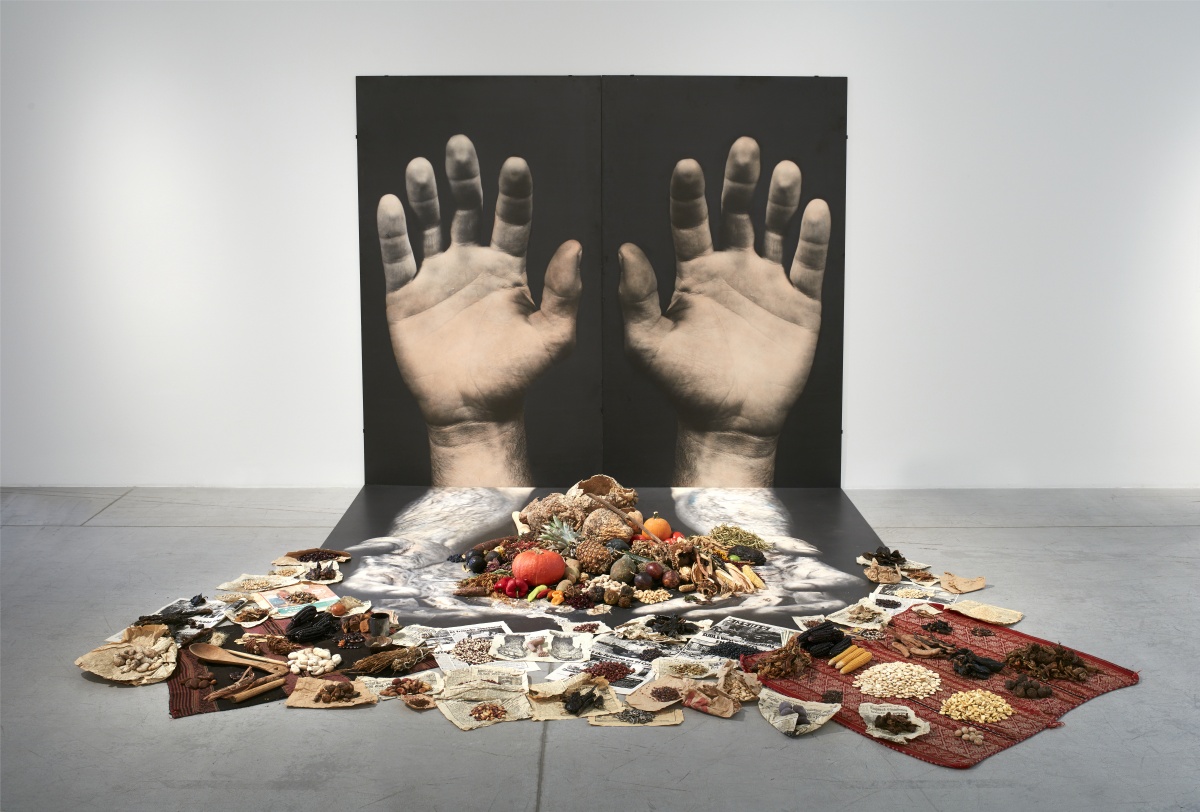 Food is central to Ron Benner’s practice. Internationally recognized as an acclaimed artist, writer and activist for the past four decades, Benner explores the history and political economics of food. Much of his work is installation-based and site specific, often made with photographs, mixed media and vegetation. Recently, Nadia Abraham, an AGO Interpretive Planner, was joined in virtual conversation by Sjoukje van der Laan, AGO Assistant Conservator, Contemporary Art, to speak about Benner’s Anthro-Apologies (and the trees grew inwards – for Manuel Scorza) (1979–80), as it relates to the conservation of contemporary artworks.

Acquired by the AGO in 1994, Anthro-Apologies is a large installation. It features gelatin silver photographs, presumably of a farmer’s hands: two placed against the wall and two on the ground. Piles of fruits, vegetables, seeds, nuts, spices and other  remnants Benner gathered in Peru sit atop the lower two photographs. Among the collected remnants are manta cloths, banknotes, coins and clippings from Amauta, a Peruvian publication active in the mid-1920s that confronted colonial perspectives towards Indigenous peoples and advocated for Indigenism in Latin America. Benner was inspired by his travels to Peru in the late 1970s and the agricultural products native to the country. He met Peruvian writer and politician Manuel Scorza, whose 1979 novel La tumba del relámpago (The Tomb of the Lightning) loosely inspired the title of this work.

First exhibited in the late 1970s and again in 1995, this work was last on view at the AGO in 2017 for Toronto: Tributes + Tributaries, 1971–1989, the group exhibition curated by AGO Curator, Indigenous Art, Wanda Nanibush. While the exhibition was open, Nanibush described  the ephemeral qualities of Anthro-Apologies as echoing ideas surrounding preservation in art that were circulating during the 1970s and '80s.

The fruits and vegetables in Anthro-Apologies are very much real. They decompose, decay, grow mold and even attract fruit flies. This presents a unique challenge in its conservation and further amplifies the concept of the work. For van der Laan, her routine considerations for proper conservation are heightened because of food’s perishable nature. “Our focus is to preserve and conserve the work’s original concept and present it in the most original way to the public,” she explained. “When we installed the work in 2016, we were lucky Ron was able to come in for the installation. We took that opportunity to have an in-depth conversation with him about how he sees the artwork and his wishes for the future.” The AGO Conservation team aims to slow down, not stop, the process of deterioration. Each time the work is being prepared for exhibition, the conservators will evaluate what can be displayed as is, what needs to be replaced and what can be discarded. Once 75 per cent of the photographs are lost (due to damage caused by the rotting food), they will be replaced with reproductions. The fruits and vegetables can also be replaced, depending on availability in Canada, as the years pass.

On one hand, the work conceptualizes the cyclical nature of life and death for all living things. On the other, it references the politics enmeshed in food insecurity around the globe—a recent example being the Indian Farmer Protests in response to new (and arguably unjust) agricultural laws enacted by the Indian government. Almost 40 years after the work was made, the message still rings clear. “For me, this work represents that the moment that food is capitalized on—which happens these days and has been happening for decades and even centuries—a massive imbalance occurs between people profiting from food and people who actually need food,” explains van der Laan.  “It represents that when you hang a corporate value on food, it can rot away. In the case of this installation, it rots away in the hands of the farmer.”

Visitors to the Museum London can see Benner’s water garden installation As Crows Flies (1995), which has been growing just outside the museum doors for the past 16 years. And later this year, his work will be included in the group exhibition Enawendewin/Relationships at the McMaster Museum of Art.

Check out our Material Explorations series with this story about linen, this one about plaster and this one about lucite for more stories with a conservation perspective. Learn about artists from London, Ontario, like Greg Curnoe, Kim Ondaatje and Esmaa Mohamoud, on AGOinsider.