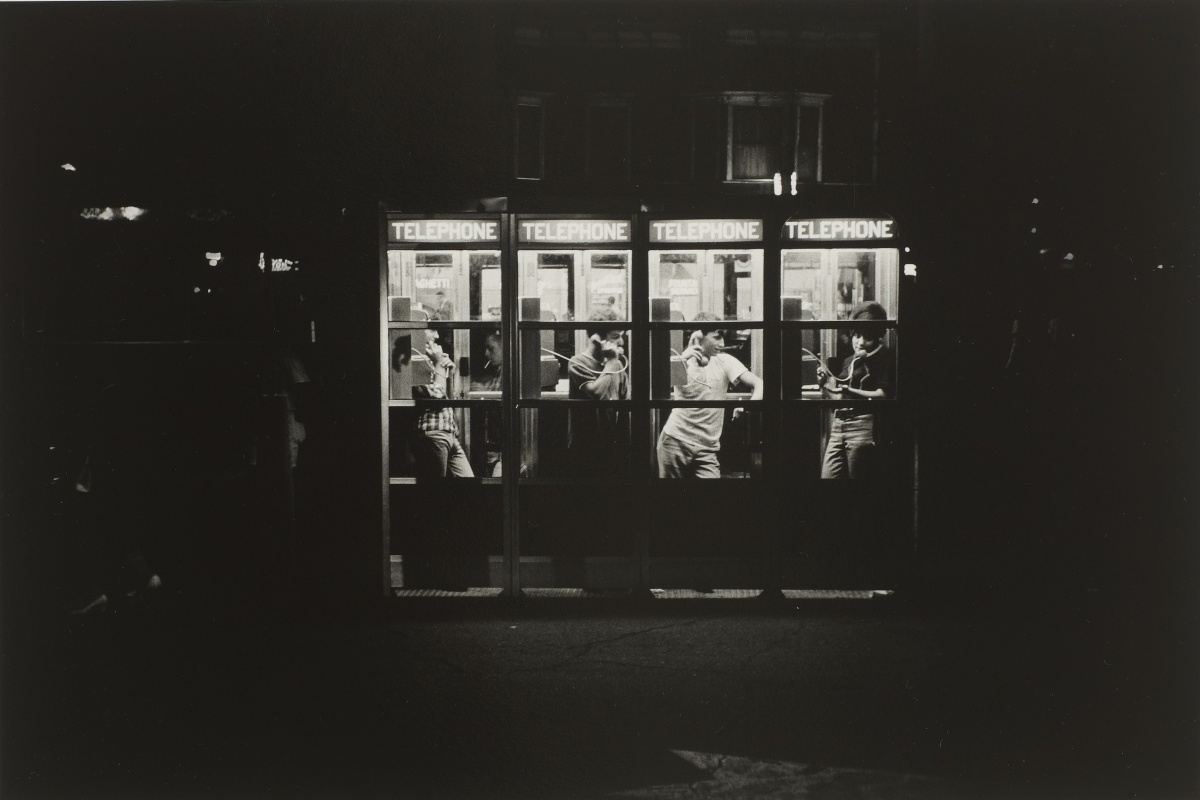 Charles Gagnon was a prolific multidisciplinary artist and academic who worked across different media throughout his nearly 50-year career. Born in 1934, in Montréal, Québec, Gagnon was renowned for his photographs and paintings, although his artistic practice also included explorations in experimental film, assemblage, design and sound. His presence looms large in the history of Canadian art, especially throughout the second half of the 20th century. In 2002, (just three years before his passing), he was honoured for his artistic contributions with a Governor General’s Award in Visual and Media Arts, adding to the many other accolades awarded to him throughout his career. In the AGO’s group exhibition, Documents, 1960s – 1970s, nine of Gagnon’s photographs are on view including Cabines téléphonique (1965) (image above), alongside the likes of Bhupendra Karia, Ming Smith, David Goldblatt and Ernest Cole. This exhibition showcases how photographers from around the globe explored documentary photography and used this medium to bear witness to, celebrate and examine the world during times of revolutionary change.

The years between 1955 and 1960 marked a transformative moment for Gagnon, both professionally and personally. He spent them living and working in New York City and studying at the Parsons School of Design. He eagerly immersed himself in the New York art scene and launched into a period of intense artistic production and academic study. At the time, art in New York was in transition, and creatives across different media were expanding the frameworks of their respective practices. Gagnon witnessed this shift, regularly visiting the Egyptian collection at the Metropolitan Museum of Art and later, exhibiting his paintings in group shows in 1958.

Gagnon photographed Cabines téléphonique five years after his return to Montréal, coinciding with what has been cited as another pivotal year for him. He was now involved in the Montréal art scene, operating in a wider visual language beyond painting and photography, such as writing, film, box-cut constructions and sound. And yet, photography and painting still remained the complementary focal points of his practice. Through his photographs, in particular, he captured the spontaneity of life in the public realm and re-framed the images as insightful observations. His approach has been categorized as falling under “social landscape”, a term coined by American photographer Nathan Lyons. The composition of Cabines téléphonique, illuminated by the lighting of the phone booths, takes on an almost sculptural quality. Each subject is framed standing inside, mirroring each other and yet, absorbed in their own conversations.

Since the late 1950s, Gagnon’s work across all media has been mounted in several solo and group exhibitions, nationally and internationally, but perhaps most extensively across Canada at art institutions such as the National Gallery of Canada; Musée des beaux-arts de Montréal; Musée d'art contemporain, Montreal; and the AGO.

Presented in collaboration with the Scotiabank CONTACT Photography Festival, Documents 1960s – 1970s will be on view at the AGO once the doors reopen to the public. Learn more about the photographers featured in the exhibition, including Paul Kodjo, Martha Rosler, Ian Wallace and Malick Sidibé, in your AGOinsider.