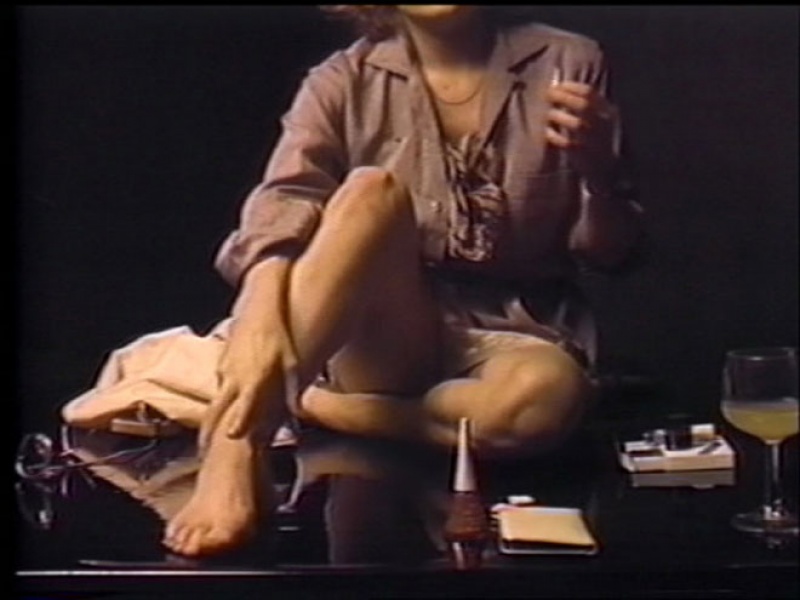 Turn
Stephen Cruise, 1971, 6:30 min., video, b&w, sound.
Standing against a wall in a T-shirt printed with the letters T and U in vertical order, Cruise begins to writhe out of the T-shirt without using his arms. The outline of the original shirt is marked in dark ink on the wall, the base of the shirt is attached to the wall, a microphone records the intensity of each movement, and a voice announces the duration of the action at thirty second intervals. Cruise slowly slinks out of the skin of the shirt and when the action is completed, the shirt is inside out and the letters R and N are exposed.

Baby Dolls
Rodney Werden, 1978, 19 min., video, colour, sound.
An eighteen year old male talks of his up-coming sex change and how he imagines life as a woman. The talk is frank and informative. The visuals consist of live video of a pedicure of a female foot shot close up. The audio consists of a male voice over of an interview conducted by the producer re-edited into a monologue by the subject.

Black & White
Raphael Bendahan, 1971, 8 min., 16mm film, b&w, sound.
Black & White/Noir et Blanc is an eight-minute experimental film poem. The first half is the play of white light on grey background, and coupled with the soundtrack built of amplified bursts of white noise, it is designed to put the spectator into a more receptive mood for the second half - a naked black man dancing, captured sensitively by Raphael's variable-speed camera. The editing was done right in the Bolex and the rhythm works; it speeds up and slows down just at the right times to create a continuous flow of movement and energy." - A. Ibranyi-Kiss, Cinema Canada

Hormone Warzone
Hummer Sisters, 1983, 11 min., video, colour, sound
The tape surveys birth control methods from Aristotle ("mouse dung checks abominable thoughts in men") to the I.U.D. ("so you can be available more often than any man you ever met"), the diaphragm ("never show it to a man unless he's in love with you"), and proposes a new form of contraception - Men.