Warning: strtr() expects parameter 1 to be string, array given in twig_replace_filter() (line 528 of vendor/twig/twig/src/Extension/CoreExtension.php).
Talks 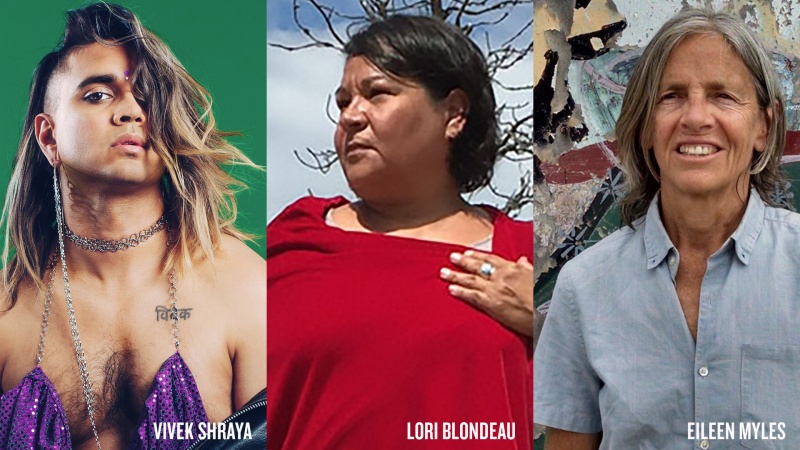 O’Keeffe spent much of her career railing against the persistent gender divide in the art world, and she chafed at being defined as a woman artist. Join poet Eileen Myles and artists Lori Blondeau and Vivek Shraya in conversation with curator Georgiana Uhlyarik as they examine how issues of tokenism, authenticity, and oppression impact the experiences of woman-identified artists today.

Lori Blondeau is a Cree/Saulteaux/Metis artist from Saskatchewan, Blondeau holds an MFA from the University of Saskatchewan, and has sat on the Advisory Panel for Visual Arts for the Canada Council for the Arts and is a co-founder and the current director of TRIBE, an Aboriginal arts organization. Her practice includes both visual and performance contemporary art.

Eileen Myles is a poet, novelist and performer whose books include Chelsea Girls, I Must Be Living Twice, selected poems and The Importance of Being Iceland/travel essays in art. Afterglow (a dog memoir) will be out in September 2017. In 1992 Myles conducted an openly female write in campaign for president of the United States. They have received grants and awards from the Guggenheim foundation, Creative Capital, the Foundation for Contemporary Art and in 2016 was awarded the Clark Prize for excellence in art writing. Myles is also a television poet. Their poems have appeared in seasons 2 and 3 of the Emmy-winning TV show Transparent. They live in New York and Marfa TX.

Vivek Shraya is a Toronto-based artist whose body of work includes several albums, films, and books. Her first book of poetry, even this page is white, is longlisted for CBC’s Canada Reads and was listed as one of the Best Books of 2016 by The Walrus. Her debut novel, She of the Mountains, was named one of The Globe and Mail’s Best Books, and her first children’s picture book, The Boy & the Bindi, was featured on the National Post Bestseller List. Vivek has read and performed inter¬nationally at shows, festivals and post-secondary institutions, including sharing the stage with Tegan & Sara. She is one half of the music duo Too Attached. Vivek was a 2016 Pride Toronto Grand Marshal, a four-time Lambda Literary Award finalist, a 2015 Toronto Arts Foundation Emerging Artist Award finalist, and a 2015 recipient of the Writers’ Trust of Canada’s Dayne Ogilvie Prize Honour of Distinction.

The exhibition is organized by Tate Modern in collaboration with the Art Gallery of Ontario and Bank Austria Kunstforum.