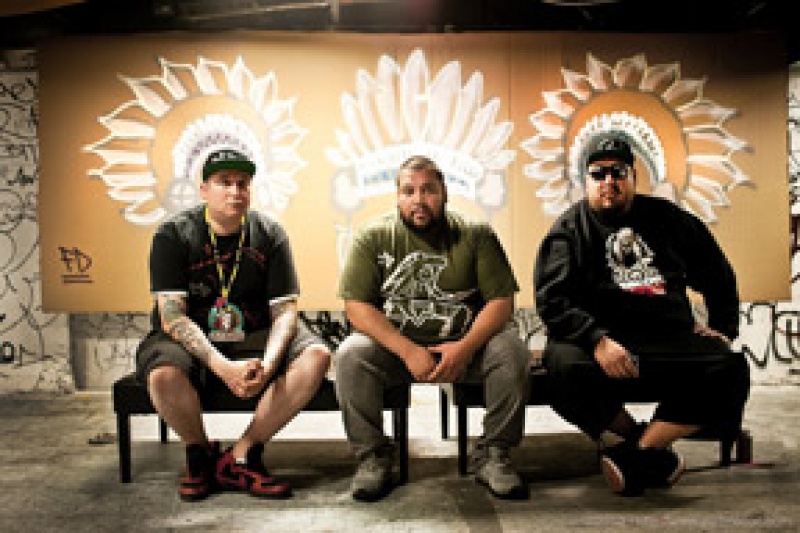 Join DJ NDN, DJ Shub, and Bear Witness of A Tribe Called Red as they speak about their music and artistic practices in a candid discussion moderated by David General.

Hailing from Ottawa, Ontario, Aboriginal Producer/DJ collective A Tribe Called Red-made up of DJ NDN, DJ Shub, and Bear Witness-blends elements of dub step, reggae, dancehall, hip hop, electronic and traditional Aboriginal music to create the group’s unique style of powwowstep. Their live performance combines their innovative musical mash-ups with Bear Witness’ stunning video projections for an all-out assault on the senses. The collective has garnered critical acclaim for their first self-titled album and were longlisted for the 2012 Polaris Music Prize and host the monthly Electric Powwow based in Ottawa, Ontario.

David General is a sculptor, educator and Aboriginal arts activist based in Six Nations of the Grand River in Ontario. His varied career spans a range of activities, all of which demonstrate his commitment to building his community's identity, health and prosperity. David's creative practice has involved solo and group exhibitions across the country, and his work is included in many of the country's most important collections, including that of the Canadian Museum of Civilization, the Indian Art Centre Collection at Indian and Northern Affairs Canada, the McMichael Canadian Art Collection, the Royal Ontario Museum, and the private collections of Petro Canada and Ontario Hydro.

The evening is hosted by OCAD University's Aboriginal Visual Culture Program and the Art Gallery of Ontario. A reception at 7:30pm, following the workshop will be held at The Rex Hotel, 194 Queen Street West.