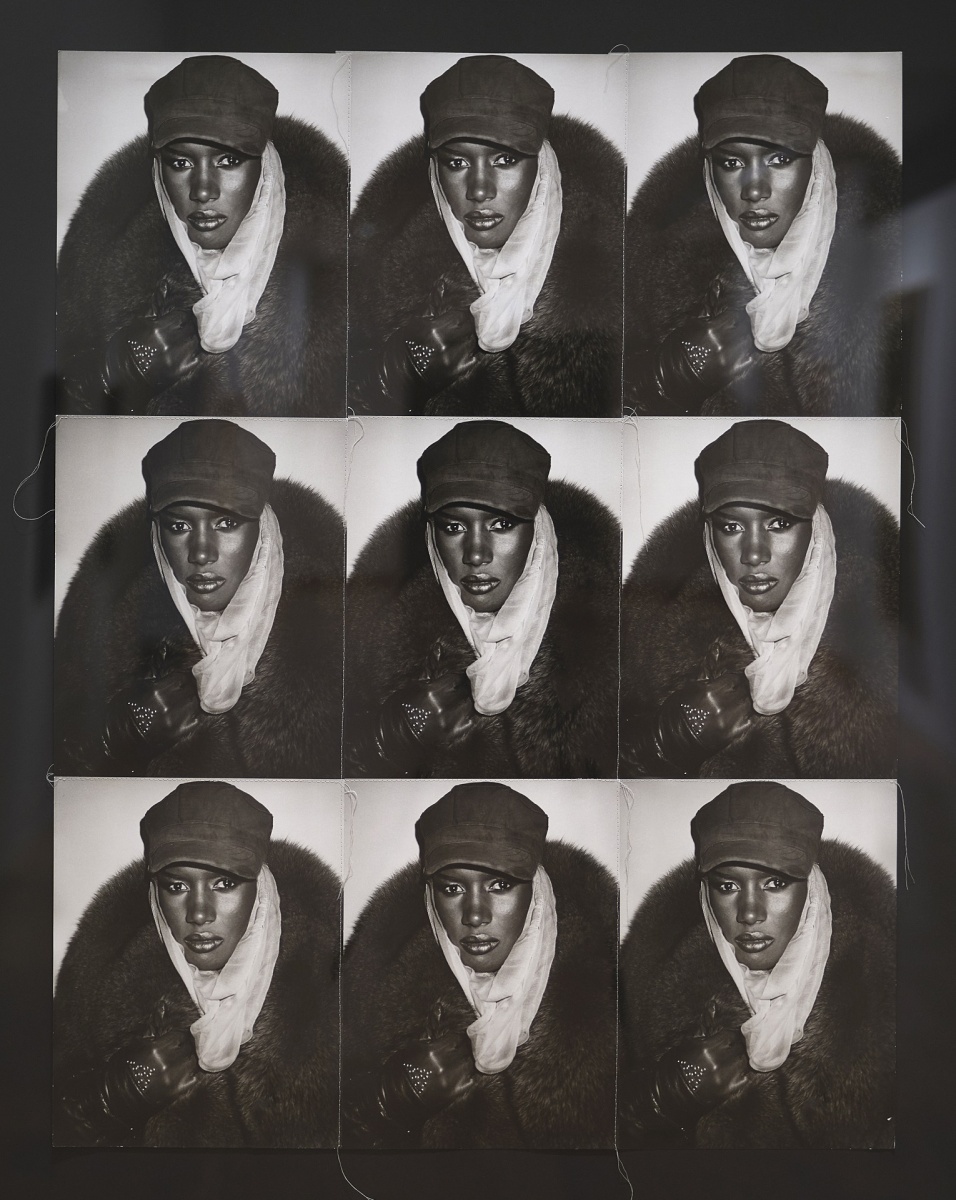 While Andy Warhol’s legacy is marked by his profound effect on Pop art, it is also defined by his epic social life and affinity for celebrity. Warhol’s endless list of friends who were prominent artists, actors and musicians often doubled as a source for the sitters featured in his work. Famously, his time spent partying at Studio 54 and building culture and community at The Factory was instrumental in forming his relationships. One of Warhol’s closest friends and beloved muses during the 1970s and '80s was the iconic model, musician and grand personality, Grace Jones. A stitched photograph made by Warhol and an Interview Magazine cover – both depicting Jones – are featured in Andy Warhol, on view now at the AGO.

Born in 1948 in Spanish Town, Jamaica, Grace Beverly Jones immigrated to upstate New York with her family in 1961. With her statuesque beauty and iconic flat top, fade hairstyle, she began a successful modeling career at age 18, relocating to Paris where she walked the runway for Yves St. Laurent and graced the covers of Vogue and Elle magazines. Prior to her global stardom – marked by her 1977 debut album Portfolio – Jones was a fixture on the New York City art and nightlife scenes. It was here she and Warhol met, and they began a storied friendship lasting until his final days. Below, we’ve outlined some notable moments shared by these two groundbreaking artists.

When asked, neither Jones or Warhol could ever recall the specifics of their first encounter, but it occurred in the mid 1970s via mutual friends in the New York City art and nightlife scene. In her 2015 memoir, Jones reflects on this period and her early relationship with the enigmatic pop artist stating, “One minute you don’t know him, then you do.” In 1978, photographer Ronald Galella snapped an iconic shot of the two friends while attending a premiere party for the film Grease at Studio 54 – this photograph was later part of the 2020 AGO exhibition Studio 54: Night Magic.

Jones was featured in a number of Warhol's works. Their creative relationship started in 1984. The two were meant to rendezvous for a Vogue photoshoot of Jones, as well as her cover photograph for Warhol’s Interview magazine. Warhol recounted details of this day in his diary, mentioning Jones was hours late to their meeting and was eventually tracked down in the midst of a luxurious fur coat shopping spree. One of the photographs from that day went on to be featured in Warhol’s stitched photograph of Jones (image above), and another became the cover of Interview in October 1984.

1986 may be the most documented year in their friendship. Jones was at the height of her celebrity, having released seven studio albums and starring in Hollywood films by the first half of the decade. Warhol featured Jones in several of his completed screenprints and photographs. From 1982 until his death in 1987, Warhol produced a series of works using multiple identical copies of black-and-white photographs sewn together with loosely dangling thread. Grace Jones (1986) (image above), on view in Andy Warhol, is one such work featuring nine gelatin silver prints of Jones stitched together in a grid formation. In this tightly cropped image, she looks directly towards the camera with a piercing gaze; dressed decadently with a fur coat, leather glove, scarf and cap. Although the original photograph was taken during that infamous 1984 photoshoot, the work was completed in 1986. In the same year again, Warhol featured Jones in another stitched photograph work, Grace being painted by Keith. This grid has six photographs showing her body being painted by Keith Haring, also in 1984. Through Warhol's connections with young artists like Jean-Michel Basquiat and Francesco Clemente, Jones was introduced to Haring in the 1980s; the two went on to collaborate on some of Jones's most visually striking music videos.

In April 1986, Jones and Warhol made a grand entrance at the wedding of Arnold Schwarzenegger and Maria Shriver. Warhol, at first, was reluctant to attend because he could not bring a guest, reportedly finding out in the media that Jones intended to attend the wedding with him. They flew in Massachusetts on her private jet. "Andy and I got into this jeep that had come to get us, no limo, and we arrived at the church," recalled Jones in her memoir, "everyone is cheering and screaming outside and we enter the church. Late. At the exact moment that Arnold and Maria are on their knees finishing off their special, intimate ceremony, we arrive. The doors noisily crack open and they turn around to see what the commotion is, and it is, guess who, Grace and Andy. Late. They didn’t say anything, but you could see from the looks on their faces that they were not at all impressed.”

Despite his deteriorating health, Warhol steadily continued to create new artwork in the months before his death. In February 1987, he passed away unexpectedly in a New York City hospital, as a result of complications during gallbladder surgery. He was buried beside his parents at the St. John the Baptist Byzantine Catholic Cemetery in Pittsburgh. Jones was photographed outside St. Patrick’s Cathedral in Manhattan while attending the memorial service held for Warhol in April. 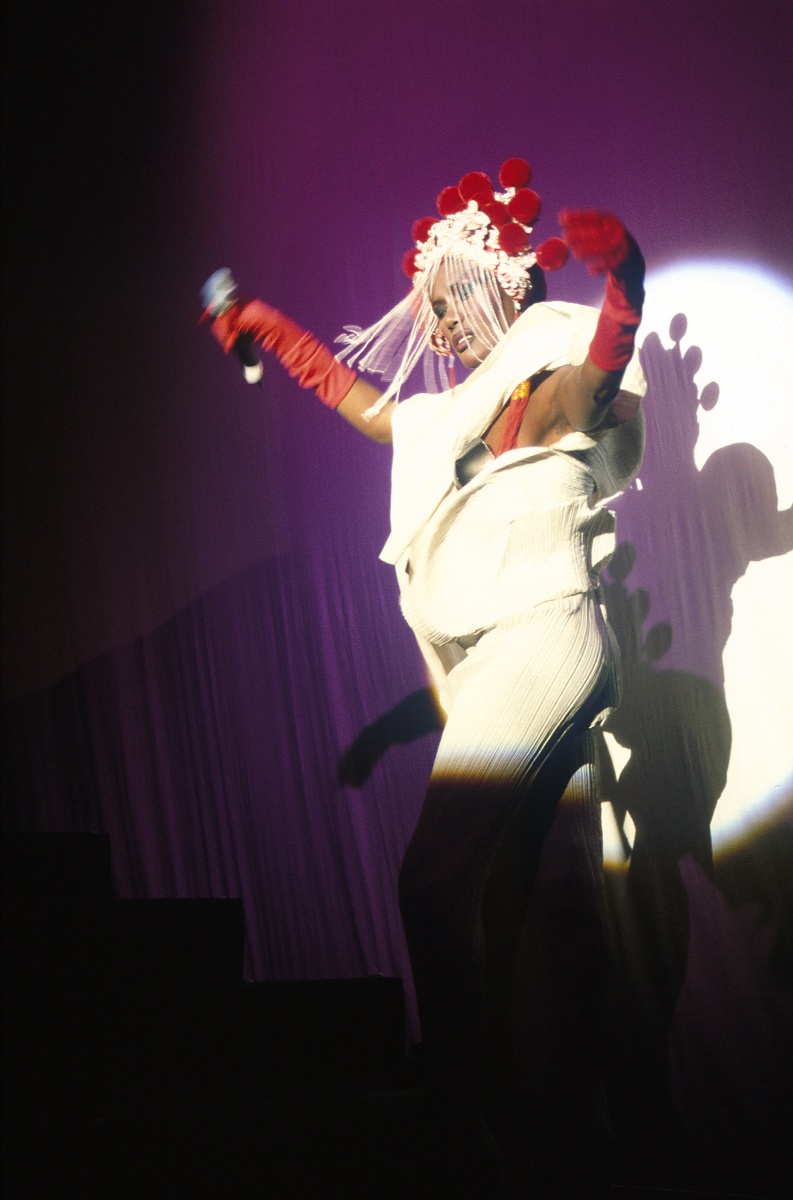 In the years since Warhol’s death, Jones has continued to forge her path forward as a trailblazing performer with her unwavering confidence, creativity and wit. She even performed at the AGO in the late 1990s and in 2016. She has spoken fondly of her time spent with Warhol, mentioning their adventures together in her 2015 memoir I’ll Never Write My Memoirs, and the 2018 documentary Grace Jones: Bloodlight and Bami. Until late November 2021, visitors to the Andy Warhol Museum in Pittsburgh can learn even more about the duo in the collection installation A Taste of Grace.